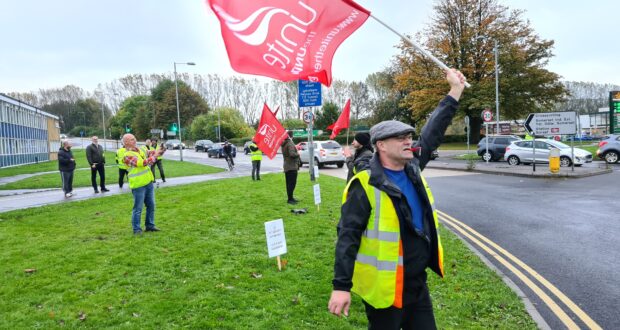 It was pouring with rain but pickets had been out since 4.00 am this morning at Blackwood, Cwmbran and Brynmawr Stagecoach depots fighting for a decent pay rise.

Over 250 bus drivers, members of Unite the Union at the three Stagecoach depots in the Gwent valleys have started 16 days  strike action to fight for a basic pay rise.

Bus services across the area have ground to a halt as drivers walked out at Cwmbran, Blackwood and Brynmawr depots. They are demanding a rise to £10.50 an hour with no strings, Stagecoach are offering £10.10 but even that low wage would have to be funded by cuts in sick pay and breaks.

The drivers who have kept services running throughout the pandemic are paid just £9.50 and hour and have not had a pay rise for three years – in effect a 10% pay cut. Stagecoach were full of warm words for the efforts of the drivers through the pandemic and admit they deserve a rise but those words have proved to be empty while they have continued to give seven figure payouts to company owners.

About half the workforce at Cwmbran depot turned out to support picket lines on the first day of the strike and the mood was absolutely determined to fight for as long as is necessary to win what is a basic wage demand. Blackwood pickets reported that they have set up a WhatsApp group in which they’re sharing memes and stories of passengers and “bus spotters” supporting them.

As Russell Edwards shop steward at Cwmbran depot explained “some drivers in the south west of England have won well over £11 an hour”.

Public support has been solid too with passengers wishing the drivers good luck the day before the strike and car drivers hooting their support. 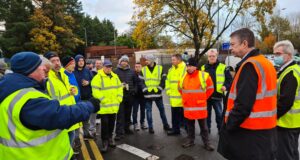